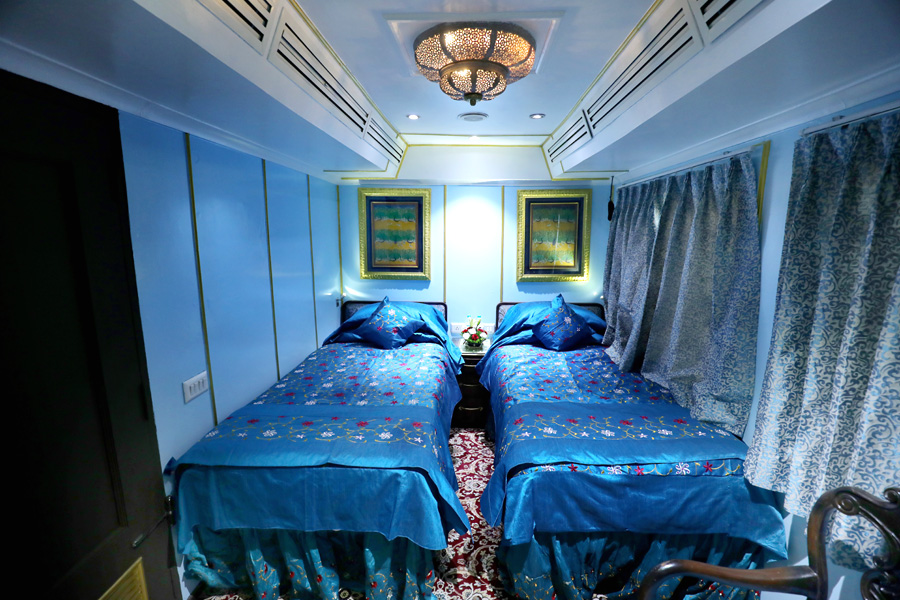 The Palace on Wheels luxury train takes you on a scintillating journey into the royal land of sand dunes and regal palaces. Voted as the 4th best luxury train in the world, the Palace on Wheels carries with it an intrinsic ambience that goes perfectly well with the majestic charm and beauty spread so lavishly across the Indian terrain.

The journey to the hinterland of the desert starts every Wednesday evening from New Delhi and ends the following Wednesday early in the morning, back at the same station. In 7 Nights/8 Days the train traverses over 3000 Kilometres ( or 1850 miles).

On the Palace on Wheels, your journey is full of exuberance and luxurious feeling. A perfect chance to relive the era when kings and queens ruled; when royalty spelt magic; when charm and mysticism was in the air.

The train is completely self- sufficient and is fully air-conditioned, Each cabin has attached toilers, specially facilitated for the global luxury traveler with all modern amenities such as wifi, mini pantry, music channel, a safe, wall to wall carpeting etc. Each saloon also has a personal attendant, also known as khidmatgars, at your service.

You would find the royal past you etched into the historical coaches. The carriages are uniquely named after famous Palace & Forts of Rajasthan. The Rich Interiors of the Cabins are Either in Hues of Ruby, Turquoise Or Pearl

There are Two Resto-Bar lounges on the train & an aryurvedic spa facility. Complimentary Wi-fi services are also made available through sharing dongles.

The basic concept of India’s first luxury train tour that still holds true today is - Overnight travel in comfortable AC sleeping chambers on the train and pre-arranged group sightseeing in the day by AC buses.

The basic concept of India’s first luxury train tour that still holds true today is - Overnight travel in comfortable AC sleeping chambers on the train and pre-arranged group sightseeing in the day by AC buses.

On rolling back wheels of time, we find the rulers of princely states of Rajputana, Gujarat, the Nizam of Hyderabad and the Viceroy of British India travelled by these luxurious coaches. After independence, these coaches were parked and remained in this state for a quarter of a century until in 1981-82, when the Rajasthan Tourism Development Corporation and Indian Railways launched a special heritage tourist train for providing a unique memorable experience to the tourists visiting Rajasthan.

The name Palace on Wheels was derived from the royal background of the coaches. Gradually many infrastructural changes were brought about in the coaches while keeping the same aesthetics of the interiors alive, matching the interiors of the royal state. In late 1980s, the original passengers saloons of Ex Maharajas were replaced by Metre Gauge train, that had AC Cabins with sharing bathrooms. Then in 1996, due to rail track conversion in India. A Broad Guage version of the Palace On Wheels train was introduced in 1996, where all the Cabins had private attached bathrooms.

In September 2017, new train carriages have been introduced on the Palace on Wheels luxury train, that are more spacious in size & now guests have the option to book Deluxe or Super Deluxe Cabins.

Explore the majestic land of Rajasthan and experience a journey worthy of the Maharajas of yore. Rajasthan opens its treasure chest and presents all its mystical charms for the astute guests aboard Palace on Wheels train.

Report by 4:30PM at Safdarjung Railway Station for traditional welcome including garlanding, tikka and turban & check-in formalities for the ‘Week in Wonderland’ train tour. Time free for photo-shoot with traditionally attired Palace On Wheels staff. Be escorted to your saloon cabins by personal attendant for briefing on cabin facilities. At leisure, proceed to Bar Lounge for complimentary welcome drink. The train departs at 6:30PM & dinner served onboard.

After brief photo stop at Hawa Mahal (Palace Of winds), the sightseeing tour reaches the excursion to UNESCO World Heritage Site of Hill Fort Palace of Amber in the afternoon. Enjoy an elephant ride up the steep ramparts of the fort. Lunch is held in the 1135 AD Boutique Restaurant, located in Fort premises.

At around 5pm, visit the vibrant local market for shopping. Return to Palace on Wheels train around 6:00PM & depart for the next destination. Dinner is served on-board.

After an early morning at 6:30 AM in a forest lodge, proceed to jungle safari in 15-seater canters inside Ranthambhore Tiger Reserve. One of the most popular reserves in India with a rich history; the jungle is home to Tigers, Panthers, Sloth bears, Pythons, Marsh crocodiles, hundreds of deers and numerous birds. Truly a delight for wildlife lovers.

Return back to Sawai Madhopur Railway Station and depart on train by 10:00 AM. Lunch is prepared onboard.

At 04:00PM the Palace on Wheels train reaches Chittorgarh Railway Station. Begin excursion to UNESCO World Heritage Site of Hill Fort of Chittorgarh, spread over a huge plateau - with history dating back to 11th century. It is considered to be the largest fort of India.

Later enjoy boat ride around the world famous "Lake Palace Hotel" atop a small island in the middle of Lake Pichola. Lunch is held at the majestic Fatehprakash Palace Hotel.

Later, you get time free for shopping followed by a visit to the Royal Gardens at Saheliyon Ki Bari. return to train by 3 pm & depart. Dinner onboard.

After onboard Breakfast proceed by 09:30AM to UNESCO World Heritage Site of Jaisalmer Fort, which seems straight out of an Arabian Nights fable. Enjoy a leisurely walk through the 15th century built living Fort complex, standing at a height of hundred meters over Jaisalmer town & glows golden in the afternoon sun. The fort is entered through a forbidding series of massive gates leading to a large courtyard.

Then visit Patwon ki Haveli, one of the largest and most elaborate mansion houses .-which is five storey high & extensively carved. Nearby is located a group of 15th century built Jain Temples, which are beautifully carved & have a library hosting some of the oldest manuscripts of India.

Train arrives at 08:00 AM in Jodhpur and after on-board breakfast proceed for sightseeing of 16th century built Mehrangarh Fort, atop a rocky hill which soars 125 Mts. above Jodhpur town. The Palace complex it is approached by a series of gateways set at an angle so that enemy armies could not charge, with any success. Once past the Fort gates, you have access to breath taking Palatial Apartments (Mahal), overlooking wide courtyards. Inside the fort complex is a museum having wide & impressive collection of Royal dresses & Medieval weapons. Nearby the Fort complex is located, late 19th century built Jaswant Thada, a cluster of royal cenotaphs in white marble. Later visit museum at Umaid Bhawan Palace, displaying personal artifacts of H.H. Maharaja of Jodhpur. Lunch is served at Hanwant Mahal Boutique Restaurant.

Return to Palace on Wheels train and depart by 3:30PM. Dinner is served on-board.

At 06:30 AM proceed to UNESCO world Heritage Site of Bharatpur Bird Sanctuary& enjoy cycle rickshaw ride to view many of 375 species of both local & migratory birds (from places like Sri-Lanka, Europe, Siberia, China and Tibet). Return to train for breakfast & depart by 08:45 AM.

Train drops you at Railway station on outskirts of Agra at 10:30 AM. The sightseeing tour starts with a visit to the UNESCO World Heritage Site of Agra Fort, the seat of power of the once mighty Mughal Empire.

Lunch at ITC Mughal Hotel is followed by a visit to the majestic Taj Mahal, one of seven wonders of modern world & a flawless architectural wonder built in white marble. Afterwards, guests have some time free for shopping.

Then return to train for onboard dinner & depart.

The Palace on Wheels train returns to Delhi’s Safdarjung Railway Station by 05:30AM. Check-out by 07:15 AM after early breakfast.

The Palace on Wheels on-board management reserves the right to alter timings of the tour in order to suit local logistics.

The hotels or restaurants mentioned for off-board meals are subject to change.